When the Malaysian government announced that they would accept 3,000 refugees from Syria in an effort to ease the refugee crisis in Europe – who will be provided with accommodation and financial assistance, one cannot help but to wonder how this is justifiable to the other refugees in Malaysia who continue to live in fear and uncertainty surrounding their illegal status. In 2015, Al-Jazeera published an article with interviews with various refugees who seem to allude to the idea that Malaysia has a “two-tier system” for refugees – choosing to warmly welcome some while shunning the others. It is hard not to agree. It is odd that the Syrian refugees who are part of the Malaysian pledge would obtain such rights, yet the Syrian refugees who, unfortunately, did not form part of the pledge were left to fend for themselves. It is even odder to think that the refugees from other countries are not even in the picture. Perhaps Alice Nah, a lecturer in the Centre for applied Human Rights at University of York is right when she said that these decisions are “partly political… partly related to concerns about irregular movement”.

Legal recognition of the status of “refugee” and “asylum-seeker”

By law, they are not distinguished from illegal migrants – hence are at risk of arrest, detention, caning and deportation by immigration officers under the Immigration Act. Irregular entry is an offence, regardless of whether they are refugees or asylum seekers or otherwise. Refugees in Malaysia do not have access to equal protection of the law, and even refugees who hold UNHCR cards or Persons of Concern letters are also arrested and placed at Immigration Detention Centres. The conditions at these detention centres are deplorable with many sources reporting that hygiene and sanitation is poor due to overcrowding and the refugees are denied access to lawyers and appealing against their detention.

There are also allegations on human trafficking perpetrated by Malaysian immigration officials, amongst other allegations on sweeping arrests and extortion by the police and RELA. In a report “A Blow to Humanity: Torture by Judicial Caning in Malaysia” by Amnesty International, there are allegations that refugees are detained without being told what the charges are, and even punished by caning as per the Immigration Act. There is also doubt as to whether any of the refugees are given the right to a fair trial as some reported having being “tried in groups of five at once” and there were fifty of them in court for a trial which lasted only “half an hour”.

Refugees in Malaysia do not have access to legal employment, but that seems set to change. However, an overwhelming portion of the refugees still are not allowed to work formal jobs. They tend to work in dirty, dangerous and difficult jobs that the local population do not wish to undertake, which is made worse by the fact that some employers exploit their dire situation by paying extremely low or no wages at all. Datuk Seri Shahidan Kassim, a Minister in the Prime Minister’s Department, had once said that the refugees were allowed to “run businesses in pasar malams (night markets)” on humanitarian grounds – but surely this is not enough to provide a livelihood for a family of refugees. He then alluded that even this arrangement was not satisfactory as they are threatening local businesses. Surely it is a legitimate concern that “the bigger issue that has to be address is how to give jobs to locals who are jobless”, but it is appalling that we shun those who arrive at our shores in hopes of escaping suffering.

Refugees are able to access only private healthcare facilities, but the cost of treatment combined with the refugees’ irregular income make healthcare unaffordable. This is compounded by the fact that many refugees face mental health issues and other physical health issues resulting from their poor living conditions.

Refugee children are also denied formal education. Some children even resorting to forced begging because they had incurred large smuggling debts in reaching Malaysian shores.

In February 2017, the Malaysian government announced that they are launching a pilot programme with the UNHCR to allow Rohingya refugees to legally work in Malaysia. While this move has been hailed as a “positive step” and a “win-win” situation, many have also expressed concerns that this move is discriminatory. However, one may argue that such a pilot programme is necessarily restricted – but on the flipside, there doesn’t seem to be much justification in this move when there are growing gaps in Malaysia’s human capital – especially a shortage of workers in the manufacturing, construction, plantation and furniture-making industries that has caused an influx of foreign labour.

It does seem ironic that the Malaysian government would refuse to sign the UN convention on refugees because that will “encourage more foreign workers to come in as refugees and asylum seekers… [increasing] the number of illegal immigrants” when that is already the status quo with Malaysia signing a memorandum of understanding with Bangladesh to receive 1.5 million Bangladeshi workers over the next three years, adding to the 600,000 who are already legally in Malaysia. This is an optimistic statistic, compared to some sources who puts the number of legal and illegal Bangladeshi workers who are already in Malaysia to be about 1.5 million – to put this into perspective, the total existing population of Malaysia’s third largest ethnic community – the Indians – has not even reached three million. This MoU comes despite the Federation of Malaysian Manufacturers insisting that they did not forward any special requests for the government to bring in more Bangladeshi labourers, which then begs the question – is the government truly concerned about the number of foreign workers?

Perhaps the way forward is not to urge Malaysia to sign the 1951 UN Convention on the Status of Refugees and the 1967 Protocol relating to the Status of Refugees – there seems to be extreme reluctance on the part of the government to do so. However, the principles espoused in those documents are principles to which Malaysia has already agreed to in other international documents – Article 14 of the Universal Declaration of Human Rights, Article 16 of the ASEAN Human Rights Declaration and Article 22 of the Convention on the Rights of the Child – all of which advocates protection of refugees’ fundamental rights. Perhaps the way forward is the urge Malaysia to give power to these principles and recognise the refugees already present and cannot be relocated, and collaborate with more international actors to find solutions to help better the lives of the refugees – temporary or otherwise. Malaysia cannot practice this problematic, hands-offish attitude of “Let outsiders be dealt with accordingly” – to ignore the problem is to be as part of the problem. 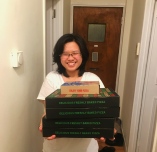 Janice is a second year law student at UCL.
Both cynical and idealistic, she is one contradiction away from being the living dead (as all law students are).

ASASIkini tries its best to share reliable content from third parties without prejudice and with a firm belief in freedom of expression. All articles are strictly the writer’s personal opinion and ASASIkini, and KPUM, does not necessarily endorse the views or opinions given by the writers.